Well we all know that Hurricane Sandy sucked ass. Thankfully my wife and I didn’t experience anything too bad besides the power going out (and still out for several more days) and my car almost getting caught in a flood. I’m currently back in my old stomping grounds where I have power to write this post right now.

Most of Monday was more about waiting then anything. I knew we were going to have it rough and lose power. I filled the bathtub, put some ice in the fridge and hoped for the best. I mainly watched movies and TV most of the day. I took a nap, watched all the idiots walking outside during the hurricane. I saw that Liberty State Park extension by Morris Canal was flooded earlier in the morning and other parts across the street. Yet people throughout the day on Monday kept walking around the police caution tape and going onto the section that was flooded. Oh look there’s tape, let’s walk around. The cops kept having to drive onto the park area to tell the idiots to get off because it will flood. People were just walking throughout the day to walk their dogs, and ignoring the fact there was a hurricane going on. And then people are surprised that people end up dead because a tree or something falls on top of them. Sure, I wanted to go outside to take pictures but I figured I’d go when the storm was done!

So by 9pm, I get an email from my apartment complex saying my garage was getting flooded and to move the car to the other garage where it was dry. I looked down at the garage and see a foot of water in the garage. I run back up the stairs to get boots and just walk through the water to rescue my car. I moved it and thankfully started okay. If I waited anymore, my car would have had water in it. I ran back inside and 20 minutes later the power went out. The whole area and city lost power then. Transformers blew, power lines went down, trees went down. Disaster. I read a little bit and then went to bed. 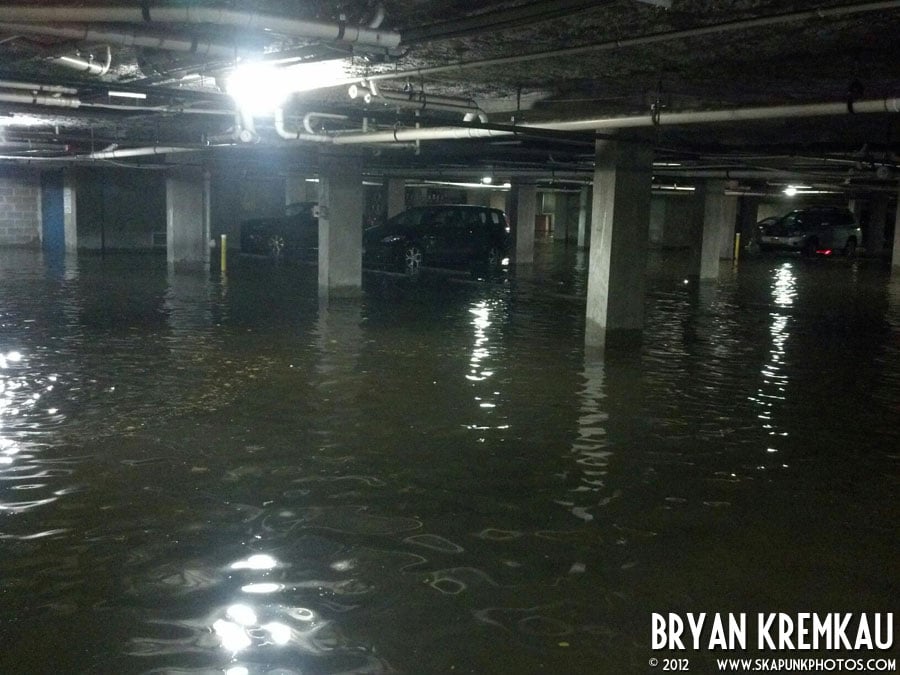 Woke up with the power still out. Decided to eat some pumpkin pie in the fridge and take a quick walk outside to see some of the damage. Was a little rough still with occasional downpours and wind, so headed back inside. Once it was calmer, Kristen and I walked around further to see all the destruction. You can tell who owned the city and the world with Goldman Sachs building being surrounded with 6 feet of sand bags. Pricks.

Honestly, it probably would have looked ten times worse if I went out during the storm but the waterfront didn’t look tooooo bad. Some trees were down, and things could have been a lot worse like it was in Atlantic City, Seaside Heights and LBI. But power is still out and hearing won’t be back in some areas until Nov. 5th or longer. So I decided to flee Jersey City and head up north where someone we knew had power. Hopefully power will come back soon!

If you’re interested in purchasing prints or licensing these photos, be sure to contact me at [email protected] I’m currently trying to save up for a new camera so any little bit helps!